This will be our third Kodiak Resonator to arrive from C.F Holcomb guitars, based in Santa Cruz, California. The first two Kodiak's we received blew us away so not only have we ordered another, but we've also gone for the holy grail of tonewoods: Brazilian rosewood.

Chris Holcomb's experience and roots in lutherie, including tutelage from Richard Hoover, Rick Turner, Jeff Traugott and Scott Walker, greatly inspires his builds today. His Kodiak Model is unique in the resonator world, as it is built similarly to an acoustic guitar. The top and back are radiused and the sides are tapered in the same way an acoustic guitar is. With the two-degree neck angle, the action can be much lower and stay consistent. The necks are built from the heel up (backwards) to guarantee that the intonation is right every time. The radius also allows Chris to make the top and back much thinner, allowing the instrument's tone to be influenced by the tonewoods used. Players used to standard acoustics will be impressed by this Kodiak's effortless response, playability, and complex tone. 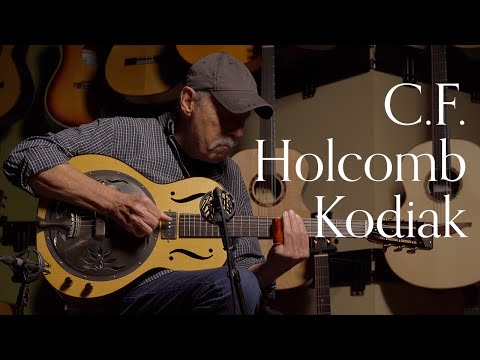 Contact us, we’re always happy to answer your questions
Get in Touch